What Are Different Types of Hydraulic Machines?

The hydraulic system works based on the principle of pressurized fluid forcing mechanical action. One of these systems installed in a machine is called a “hydraulic circuit”. These circuits are made up of a pump to compress the fluid, lines to carry it, a cylinder where the liquid is pumped and a piston moved by it under pressure in the cylinder. The hydraulic system can also drive shafts for hydraulic motors and conveyor belts.

The most common hydraulic machines are turbines and pumps, compressors or fans, positive displacement machines, and rotodynamic machines.

Positive displacement machines carry liquids found in low-pressure areas into chambers. When the chamber inlet closes, the outlet opens, and the fluid volume is reduced and expelled. Rotational machines pass fluids through rotating components; In turbines, the rotating component is called a rotor.

Positive displacement machines suffer almost no decrease in fluids during the energy transfer process. They can generate high pressures in their compact designs. Hydraulic machines work smoothly and continuously but can be easily damaged if the discharge valves close abruptly. These pumps are typically used for high-flow, low-discharge applications. Hydraulic machine in India offers the best quality products at a wide range.

Which Equipment’s Are Used for Testing of Cement?

The construction industry is often involved in a wide range of tests that require different test equipment. In addition to simple compression tests, test standards

How Compressive Strength Testing Machine Can Improve Your Product Quality

Compressive strength testing machines are incredibly valuable tools for any business that produces products of high quality. These machines offer a variety of tests and 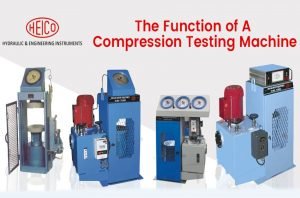 The Function of a Compression Testing Machine

Considering checking things prior to purchasing is one of the ways of behaving that grew consequently in us. From vegetables to the test drive of